[NOTE: With the release of Fight Club 2, much of the below information is now known to be inaccurate. This information will be updated once all ten issues of the sequel have been released and the entirety of the story is revealed.]

Tyler Durden is The Narrator's split personality. He was created by the perfect storm of the Narrator's insomnia-induced insanity and his frustration with a hollow life of wage-slavery and consumerism. He is the manifestation of the completely free person the Narrator wishes he could be. He is also 45 years old.

Tyler worked several night jobs. Partly to fund himself while engaging in general subversion, but also to set up situations enabling him to blackmail his employers later. In addition to his jobs, Tyler made soap from human fat, which he collected from dumpsters behind liposuction clinics. He sold this soap to fancy department stores. The soap also functioned as a source of materials for homemade explosives. It's likely that Tyler was busy setting all of this up during the time the Narrator was attending the groups and was sleeping through the night (he thought he was, anyway). This would also be when he bought the Paper Street House under the Narrator's name. By the time the Narrator's insomnia returned, Tyler had already firmly established himself in the world behind the Narrator's back.

Throughout the story, Tyler attempts to forcefully guide the Narrator to enlightenment by encouraging him to hit bottom. He wanted to gradually destroy the Narrator's empty, societally-programmed self. If he had succeeded, there would have no longer been any distinction between the Narrator and Tyler, and the split "Tyler Durden" persona wouldn't have been needed anymore. But by the end of the story, Tyler realized that he failed. The Narrator remained strongly opposed to Tyler's goals, and viewed Tyler's attempt to free him(self) as a hostile takeover of his mind. He never reached the full understanding that Tyler Durden was his real personality. The personality he percieved as "himself" was actually the fake, having been programmed into his head by society.

At the end of the story, the Narrator appears to kill Tyler by shooting himself through the face. This apparently works because it means the Narrator has finally hit bottom, momentarily becoming fully free and in control. This allows his choice to be rid of Tyler (rather than becoming him) to take full effect. Even so, a split-second shot of a penis at the end suggests that Tyler is still very much alive. Which it turns out he is, per Fight Club 2.

Tyler Durden set forth to dissolve societal programming, attack consumerism, and upset the established social order. His ideals seem to combine elements of Neo-Luddism, Anarcho-Primitivism, Buddhism, and esoteric spirituality (such as G.I. Gurdjieff's Fourth Way), with a strong anti-consumerism theme throughout. He frequently spoke of his opposition to popular culture, materialism, capitalism, most technology, and modern society in general. Tyler described his ideal world as an Arcadian paradise, humans living freely amongst post-apocalyptic urban ruins.

Some critics claim that Tyler Durden was a hypocrite, preaching freedom while commanding his own personal cult. They support this by noting how members of Project Mayhem acted in blind obedience to Tyler's orders and seemed to lack individuality. But according to Chuck Palahniuk,  "The purpose of Project Mayhem was to coach people beyond their own idea of their abilities. People had to be ordered past their own fears. Eventually the organization would vanish, leaving behind fully developed former members."  However, the story ended long before this point would have been reached.

In Fight Club 2 it's revealed that Tyler is potentially some kind of hereditary mental disorder that has been gestating in the narrator's family for generations, waiting to be fully realized and try to eliminate the present world order and start again, in much the same style of an Old Testament Biblical purge. This could just be a lie from Tyler to make the Narrator give up his free will to him, but given that Tyler also seems to exist in the Narrator's son's mind, it's possible. Also, Fight Club 2 is almost a self-aware spoof of the Fight Club franchise, so this could just be a joke. 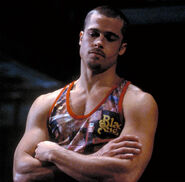