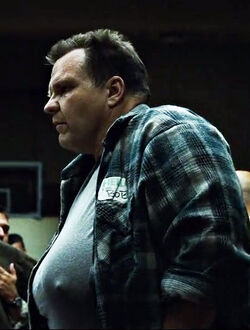 His name is Robert Paulson, former bodybuilder, wrestler and creator of a chest expansion program. Due to his excessive use of steroids, he got testicular cancer. As a result of the cancer he had his testicles removed, due to a hormone imbalance he later developed gynecomastia - which The Narrator refers to as "bitch tits". He is portrayed by Meat Loaf in the film.

He first meets The Narrator at "Remaining Men Together" - a support group for men with testicular cancer.

Later Bob joined Fight Club at Lou's Tavern, where he fought on Tuesdays and Thursdays - unintentionally avoiding The Narrator, who fought on different days. He and The Narrator had a fight together after telling him which days he attended, in which he won after The Narrator tapped out. His victory is also ironic, as he used the same kind of grip he uses when hugging The Narrator at the support group.

Eventually, he applied to join Project Mayhem. He initially was going to leave after being insulted by Tyler, not knowing the rules, but was stopped by The Narrator. He then managed to pass the test and was officially indoctrinated as a member. He was killed during Operation Latte Thunder after being shot in the head by a security guard while attempting to flee the scene of the night-time raid and being too slow due to his deformity and weight. The Narrator, not knowing he was the leader of Project Mayhem / Tyler Durden at the time, unintentionally created a new rule after getting upset over being told a rule of Project Mayhem was "members of Project Mayhem" have no name, the new rule being "in death, they have a name." This resulted in all present members beginning to chant "his name was Robert Paulson," along with the chant even reaching other chapters of Fight Club / Project Mayhem, resulting in Bob becoming a legend among fight club members and even becoming a martyr of sorts.

His body was buried in the back of the Paper Street House.

Name Origin - It has been suggested but not confirmed that Robert Paulson’s name could be a combination of the serial killer and his victim’s names, that eventually lead to his capture, Robert Hansen and Cindy Paulson respectively. Having been named after these 2 people could represent an internal conflict or his character arc from predator (wrestler) to female (bitch tits) victim.

Community content is available under CC-BY-SA unless otherwise noted.
Advertisement