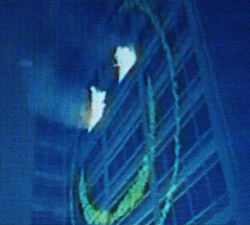 Project Mayhem evolves out of, and eventually replaces Fight Club (at least the original chapter), starting out as a "homework assignment" given out to members by Tyler Durden. As Fight Club attains a nationwide presence, Tyler uses it to spread his anti-consumerist ideas, devising increasingly elaborate pranks on corporate America. He eventually gathers the most devoted Fight Club members and forms Project Mayhem: a organization that trains itself as an army to bring down modern civilization.

Project Mayhem Trainees (which Tyler refers to as space monkeys) must first pass a test where they are left standing on the front porch of the Paper Street House, being constantly belittled and told to leave. If they hold for 3 days without food or shelter, they are then allowed to stay at the house and train as a member of Project Mayhem. Requirements:

Project Mayhem is organized in a structure of different committees:

Community content is available under CC-BY-SA unless otherwise noted.
Advertisement