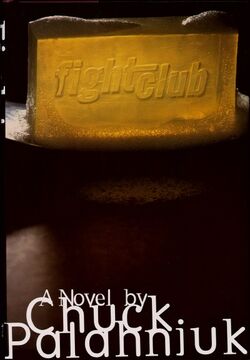 Fight Club is a 1996 novel written by American author Chuck Palahniuk. It follows the life of an anonymous narrator, a product recall specialist for an unnamed car company. Due to his stressful job and the jet lag brought upon by frequent business trips, this everyman becomes discontent with his life. Thus he becomes afflicted by recurring insomnia. After his therapist's frustrated declaration that compared to the men experiencing testicular cancer, The Narrator is not suffering, he sits in on several support groups under the guise that he, too, suffers from the diseases. Sharing the problems of others allegedly cures The Narrator's insomnia, until he encounters Marla Singer, another "tourist", who reminds The Narrator that he, too, does not belong in the groups. After a confrontation, they agree to attend separate support group meetings to avoid seeing each other. On a nude beach, The Narrator meets Tyler Durden, who is a charismatic extremist with peculiar means.

After an explosion dismantles his condominium, The Narrator asks to stay at Tyler's house. Tyler agrees, but asks The Narrator for something in return: "I want you to hit me as hard as you can". Both men find the ensuing fight enjoyable. This initial fight prompts the "two" of them to establish an underground Fight Club as a form of unconventional psychotherapy. This club draws numerous men with similiar temperaments into bare-knuckle fighting matches, set to the following rules:

1. You don't talk about fight club.

2. You don't talk about fight club.

3. When someone says stop, or goes limp, the fight is over.

6. They fight without shirts or shoes.

7. The fights go on as long as they have to.

8. If this is your first night at fight club, you have to fight.

As Tyler Durden brings Fight Club to a nationwide presence, he uses it to spread his anti-consumerist ideas, recruiting Fight Club members to participate in increasingly elaborate pranks on corporate America. He eventually gathers the most devoted Fight Club members and forms "Project Mayhem," a cult-like organisation that trains itself as an army to bring down modern civilization. This organisation, like Fight Club, is controlled by a set of rules:

5. You have to trust Tyler.

With Tyler Durden done, The Narrator waits for the bomb to explode and kill him. However, the bomb malfunctions because Tyler Durden mixed paraffin into the explosives. Still alive and holding Tyler Durden's gun, The Narrator makes the first decision that is truly his own: he puts the gun in his mouth and shoots himself.

Some time later, The Narrator awakens in a mental hospital, believing he is in Heaven, and imagines an argument with God over human nature. The book ends with The Narrator's being approached by hospital employees who reveal themselves to be Project members. They tell him their plans still continue, and that they are expecting Tyler Durden to come back.

In 1999, director David Fincher adapted the novel into a film of the same name, starring Brad Pitt and Edward Norton. Despite it's perceived failure at the box-office, the film would later go on to become a cult classic, beloved by many as one of the greatest fight movies of all time.

Retrieved from "https://fightclub.fandom.com/wiki/Fight_Club_(novel)?oldid=3431"
Community content is available under CC-BY-SA unless otherwise noted.