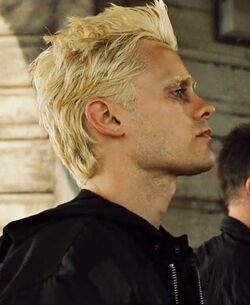 Angel Face is a Fight Club regular, and one of the "space monkeys" in Project Mayhem.

He was blonde and described as being "beautiful," hence the name Angel Face. The Narrator developed a jealous hatred for Angel Face after Tyler showed favoritism. The Narrator noted his "inflamed sense of rejection" and delivered a savage beating to Angel Face, causing him to be "less beautiful" from then on.

In the novel, The Narrator tagged him for a fight given that he was a first-timer under the eighth rule. Upon that, the boy was brutally beaten down and this triggered Tyler to either establish Project Mayhem or have Fight Club shut down.

In the film, Angel Face was already present at Fight Club, having witnessed Lou beating down on Tyler before allowing the basement to be used for the future meet-ups and the first homework assignment. He was the third recruit to be accepted into Project Mayhem after passing the commitment test on the front porch of the Paper Street House (he was deemed “too blonde”). The game had shown him already having deemed himself as Tyler's right hand before having been beaten down by The Hero on multiple occasions. He tends to get involved in Project Mayhem missions, becoming excited whenever he sees their presence on the news, even calling the anchorwoman who was reporting on the story “hot”.

Fight Club 2 reintroduced Angel Face back after ten years, showing him completely disfigured after a decade of attending Fight Club. He fought against The Narrator again before Tyler took over, brutally pounding away at The Narrator and slamming him onto the floor before fingers snap, allowing Tyler to take control. Tyler, in return, pounded at Angel Face before being strangled to death on the spot while giving a new rule: to never hit Tyler in the face.

Seeing Project Mayhem on the news

Face after beating
Add a photo to this gallery
Retrieved from "https://fightclub.fandom.com/wiki/Angel_Face?oldid=3478"
Community content is available under CC-BY-SA unless otherwise noted.